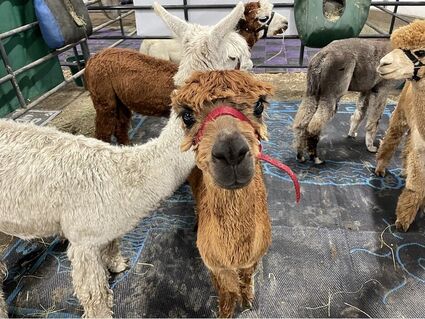 An alpaca rescued by the Port Angeles-based Olympic Peninsula Alpaca/Llama Rescue looks at the crowd with curiosity during a major gathering of alpaca owners at the Grant County Fairgrounds on Saturday and Sunday. According to Amber Miller, the rescue's vice president and youth coordinator, about 100 alpacas and llamas need to be rescued every year, mostly because their owners die, get divorced or have another major life change that makes it impossible for them to care for the animals.

It was, on the face of it, just another Saturday in which the sounds and smells of agriculture wafted from the Ardell Pavilion at the Grant County Fairgrounds.

But the bleats and the grunts filling the pavilion came from animals you don't often see in the Columbia Basin - alpacas. And there were scores of the South American camelids at the fairgrounds on Saturday. They were part of a two-day long Alpacafest show organized by the Alpaca Association of Western Washington along with the Alpaca Owners Association and the Pacific Northwest Alpaca Association that brought ranchers to Moses Lake from as far away as California, Colorado and Montana.

"There's actually about 400 alpaca ranches in Washington state," said Mark Dodrill, an Auburn resident and head of the AAWW. "It's the number two state for alpacas in the country behind Ohio."

To read more from this article, visit: https://columbiabasinherald.com/news/2022/oct/13/most-excellent-animals/