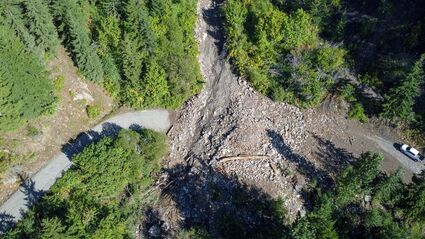 The work crew was coming down the mountain in three pick-up trucks when they hit a blinding rainstorm near Deadhorse Point, Methow Valley District Ranger Chris Furr said. 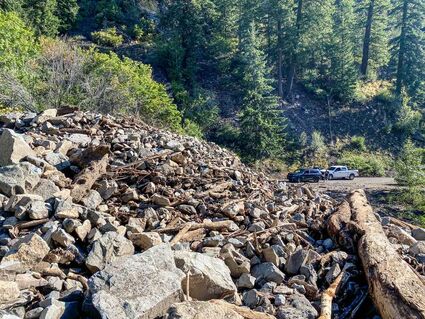 The largest slide dumped huge boulders on Hars Pass road to a depth of 25 feet.

"Rocks were falling down as they were passing through. There was nothing to do but try to continue through it," Furr said.

The first two vehicles made it through the showering debris despite very poor visibility, but their colleague was trapped behind a massive slide that rendered the road impassable, Furr said.

There were about 10 rockslides in all. The largest, about 1 mile downhill from Deadhorse Point, was 80 to 100 feet long and 25 feet deep, according to Okanogan County Emergency Manager Maurice Goodall. The ranger district contacted Goodall on Monday night because the slides stranded campers and hikers at Harts Pass.

To read more from this article, visit: https://methowvalleynews.com/2022/08/31/heavy-rains-cause-massive-rockslides-on-harts-pass-road-stranding-some-campers/