I-5 bridge project has Washington lawmakers feeling left out 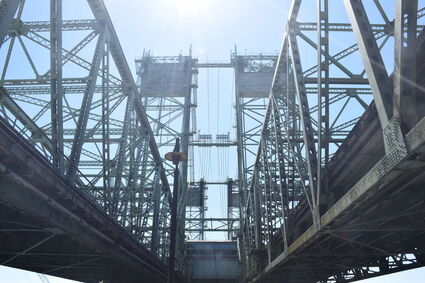 The project to replace the aging Interstate 5 bridge over the Columbia River is set to hit a milestone next month with endorsements from key stakeholder groups, though legislators on the Washington side aren't sure their priorities are being addressed in the project's current form.

During a meeting of the Joint Oregon-Washington Legislative Action Committee on June 17, lawmakers from both states heard from project staff on the current "locally preferred alternative" (LPA) for the bridge replacement.

Much of the information provided at the meeting was discussed in prior meetings of the committee and other groups formed to steer how the project will develop. Key components of the project include an auxiliary lane in both directions over the Columbia River, a light rail extension from Portland's MAX system from the Portland Expo Center to Evergreen Boulevard in Vancouver that follows I-5, a partial interchange on Hayden Island and the use of variable rate tolling to help fund the multi-billion-dollar project.

The LPA roughly doubles the width of the bridge on the automotive traffic level in each direction with the addition of auxiliary lanes and "safety shoulders," which currently aren't present on the existing structure. The bridge will also be "seismically sound" to handle potential earthquakes.

Interstate Bridge Replacement Program (IBRP) Administrator Greg Johnson mentioned program staff are expecting a preliminary navigation clearance determination from the U.S. Coast Guard "any day now." That determination would include a proposed bridge height, which IBRP assistant administrator Ray Mabey said has the potential to be higher than the 116-foot clearance found in the failed Columbia River Crossing project of last decade.

"Nothing has substantially changed in how the river is being used," Mabey said.

Though the determination is still pending, he noted the potential to require a "moveable span," which would entail a greater cost.

Johnson said the movable span under consideration would be the "largest lift span in the world" and could cost an additional $400 million.

Mabey added a higher bridge would include complications for truck traffic rates and pedestrians. It wouldn't benefit the majority of users, but would help with boat traffic.

During the three-hour meeting, Clark County lawmakers voiced concerns that the current direction of the project did not take Washingtonians' interests into as high of consideration.

Sen. Ann Rivers, R-La Center, said the reduction of commute times is a chief focus for Washington, though that priority has fallen farther down the list.

"It just seems like everything Washington has wanted, we've gotten nothing of it," Rivers said.

To read more from this article, visit: https://www.thereflector.com/stories/i-5-bridge-project-has-washington-lawmakers-feeling-left-out,295712