Off the (pi) charts! 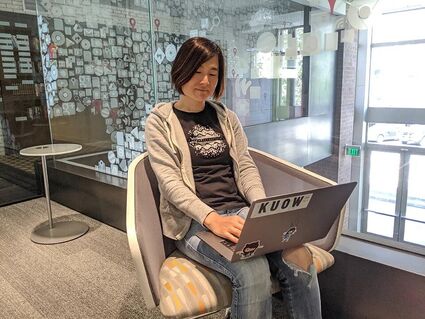 Emma Haruka Iwao started programming when she was in elementary school. Now, she's broken the world record for computing the most digits of pi-twice.

On June 8, 2022, Iwao, a Japanese computer scientist and Cloud Developer Advocate at Google in Seattle, became the first person to calculate 100 trillion digits of pi, surpassing the previous world record of 62.8 trillion digits set by Swiss researcher Thomas Keller and Iwao's personal record of 31.4 trillion, which she achieved in 2019.

"It is very exciting," says Iwao.

In the simplest terms, the number pi is a mathematical constant that describes the ratio of a circle's circumference to its diameter. The first calculation of pi was completed by Archimedes, a Greek mathematician and inventor approximately 2,200 years ago. For many centuries afterward, digits of pi were calculated by hand.

Then, in the 20th century, the invention of the digital computer exponentially increased efforts to estimate pi to the millionth, billionth, and, eventually, trillionth decimal point. By 2009, Daisuke Takahashi, a professor at the University of Tsukuba, had calculated 2.6 trillion digits of pi.

To read more from this article, visit: https://nwasianweekly.com/2022/06/off-the-pi-charts/