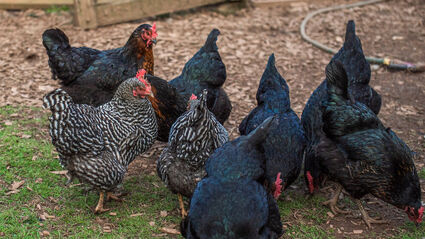 Hens peck through dirt west of Chehalis on Tuesday night.

Since its arrival in Washington state two weeks ago, highly pathogenic avian influenza (HPAI), also known as bird flu, has now hit nine backyard flocks in seven counties, with Thurston County confirming the most recent case as of Wednesday morning.

The Washington state Department of Agriculture (WSDA) tested the flock after the owner contacted WSDA's Sick Bird Hotline reporting several dead and sick birds in the flock, which contains an unknown number of chicken, geese, guinea fowl and ducks. After the flock samples tested positive at state and national labs for HPAI, the state veterinarian quarantined the flock. The flock will be euthanized to contain the spread of the virus.

Consistent with the other cases confirmed in flocks across the state, the Thurston County birds had substantial exposure to wild waterfowl.

To read more from this article, visit: https://www.yelmonline.com/stories/thurston-county-confirms-bird-flu-in-a-backyard-flock,291682