Calling all fin clippers: With a record 5 million Chinook to mark, Naselle Hatchery is buzzing 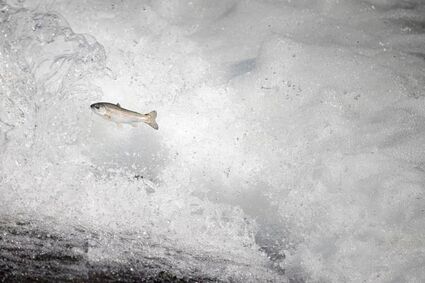 A juvenile salmon leaps over turbulent water in a rearing pond last week at the Naselle Hatchery. The hatchery is in the midst of ramping up production, including raising a record five million Chinook salmon.

NASELLE - It's a simple snip that happens in seconds, a distinguishing mark that lasts a lifetime for salmon providing crucial insight for fishery management across the Pacific Northwest.

In Washington a constellation of more than 100 state, federal and tribal facilities comprise to raise more than 200 million juvenile fish each year, according to the Washington Department of Fish and Wildlife. The Naselle Hatchery is among four state facilities in Pacific County, including Forks Creek, Nemah and Grays River.

The Naselle Hatchery, well regarded for their prolific coho production, has also ramped up Chinook from 800,000 to more than four million over the past couple of years. In addition to Chinook, the hatchery raises around 1.4 million coho, 500,000 chum and 75,000 steelhead at their facility at 270 North Valley Road.

To read more from this article, visit: https://www.chinookobserver.com/news/calling-all-fin-clippers-with-a-record-5-million-chinook-to-mark-naselle-hatchery-is/article_5d74024e-b9cc-11ec-a543-ff357d92c0ed.html