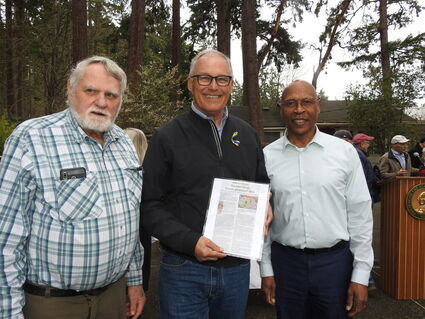 It's now one of those dates where people ask you: Where were you on that famous day, when Senate Bill 5615 was signed into law?

The screams you have been hearing wasn't due to the Seahawks, the Seattle Storm, Mariners or even the Kraken winning a game.

Rather the high boisterous shrieks came about what three Mill Creekers accomplished. March 28, 2022, is now in Washington sports and pickleball history books.

It's the day that Sen. John Lovick's Senate Bill 5615 became the law of the land. And the Beacon had a lot to do with it becoming so, because on June 4, 2021, our community paper in Mill Creek printed my column "Sunnier times means pickleball time".

In my write-up, I suggested since Washington didn't have an official sport – and pickleball was born on Bainbridge Island – it should be our state's sport.

To read more from this article, visit: https://www.millcreekbeacon.com/story/2022/03/25/news/pickleball-go-out-and-play-washington-states-official-sport-darn-wright/13584.html