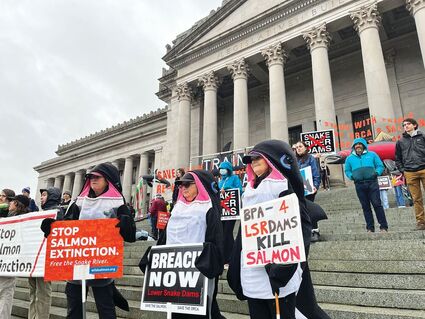 Members of the Washington Youth Ocean and River Conservation Alliance and the Earth Ministry/Washington Interfaith Power & Light marched from The Olympia Ballroom to the steps of the Capitol Jan. 13.

Starting at the Olympia Ballroom in the state capital's historic district, students from across Washington carried inflatable orcas and salmon and marched through the streets of Olympia to the steps of the Legislative building.

Chanting "Save our salmon," members of the Washington Youth Ocean and River Conservation Alliance (WYORCA) and other environmental groups advocated for the protection of Northwest salmon runs and the orca pods that depend on them.

"We need Inslee and the political leaders of the Pacific Northwest, specifically in the state Legislature to understand the urgency of this issue. The salmon cannot wait," said Maanit Goel, chair of the Sammamish Youth Board.

In the long run, these youth advocates say they want to see Snake River dams taken down, but they acknowledge it is unlikely the dams will be removed any time soon.

Washington can't afford to lose the clean energy the dams produce if the state wants to hit targets for reduced greenhouse gas emissions, and farmers in Eastern Washington rely on the dam's water supply for irrigation. Another big hurdle is cost of dam removal. A study commissioned by Gov. Jay Inslee and Sen. Patty Murray, D-Washington, outlined the steps that would need to be taken to offset the impact of dam removal. Estimates of the cost of replacing the services currently provided by the dams range from $10.3 billion to $31.3 billion and that estimate probably falls short of the true impact.

Due to the high costs and complexities of dam removal, Washington lawmakers this year are focusing on other ways to improve the conditions and aid declining salmon and orca populations.

"We've got a plan to eliminate all of those barriers to salmon migration steadily," Rep. Alex Ramel D-Bellingham, said at the WYORCA protest. "Mitigation is preventing the problem in the first place, not polluting the atmosphere with more greenhouse gases, methane, and carbon dioxide," Ramel said.

In this year's session, Rep. Mike Chapman, D-Port Angeles, introduced House Bill 1215, which focuses on the protection and restoration of riparian areas at the edges of rivers and streams. Riparian forests filter pollutants from storm water runoff, reduce erosion and are important for the stability of salmon populations.

The bill requires the State Conservation Commission to fund the protection of riparian zones and establish a salmon riparian habitat policy task force in cooperation with indigenous tribes in Washington.

The bill was introduced in the House on Jan. 10, and a public hearing was held in the House committee on Agriculture and Natural Resources.

• HB 1076 – Authorizes counties and cities to include an optional salmon recovery element within comprehensive plans adopted under the Growth Management Act.

The Washington State Journal is a non-profit website funded by the Washington Newspaper Publishers Association Foundation. Learn more at wastatejournal.org.