Blaine without a hornet buzz this year as trapping ends 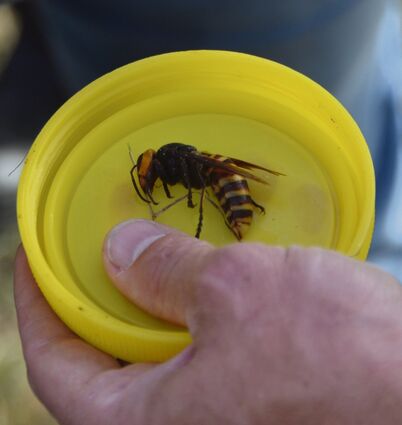 Washington state scientists are wrapping up their search for the northern giant hornet this year without detections in Blaine or statewide, but are asking the public to remain vigilant of the world's largest hornet.

"The public has been responsible for half of our detections," said Karla Salp, Washington State Department of Agriculture (WSDA) public engagement specialist. "We have traps we know can work but the more people we have continuing to look for the next couple of years will be critical to help eradicate them."

Northern giant hornets, colloquially known as murder hornets, were first confirmed in the U.S. after a dead hornet was found in Blaine on December 8, 2019. One nest was eradicated in east Blaine in October 2020 and another three nests were eradicated in late summer and fall of 2021.

No hornets were found this year despite the 1,361 traps set by the WSDA and public this summer and fall, when the hornets are most active. The hornet will be considered eradicated from Whatcom County if no hornets are detected through the end of 2024, Salp said. Traps will be set until then.

To read more from this article, visit: https://www.thenorthernlight.com/stories/blaine-without-a-hornet-buzz-this-year-as-trapping-ends,22811?