By Brandon Hansen
The Reflector 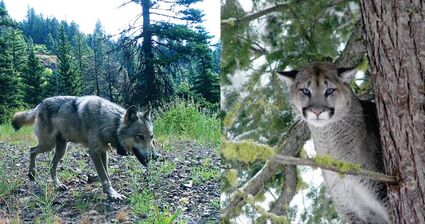 Photo courtesy of Washington Department of Fish and Wildlife

The Washington Department of Fish and Wildlife recently reported evidence that cougars are killing wolves in Washington.

The Washington Department of Fish and Wildlife (WDFW) recently reported evidence that cougars are killing wolves in Washington.

By using radio collar data, WDFW staff were able to track wolves. When a collar gave off a mortality signal, officials discovered the dead wolf was indeed killed by another predator.

WDFW Wolf Biologist Trent Roussin found one dead wolf in a steep canyon that was thick with trees. Signs pointed to the wolf being attacked while traveling down an old overgrown logging road. The fight appeared to have ended about 100 yards downhill.

The necropsy conducted by Roussin revealed the wolf's skull was pierced by strong feline teeth.

Wolves were pushed to near extinction in the early 1900s. In Washington, the wolf population didn't start to make a recovery until 2008. Because of this, WDFW did not have many years of data to see if cougar attacks on wolves were common, so the agency had to ask the other states, which have had wolf populations for a longer amount of time, if wolves come in conflict with cougar populations.

To read more from this article, visit: https://www.thereflector.com/stories/wdfw-records-cougar-attacks-on-wolves-four-confirmed-since-2013,303273