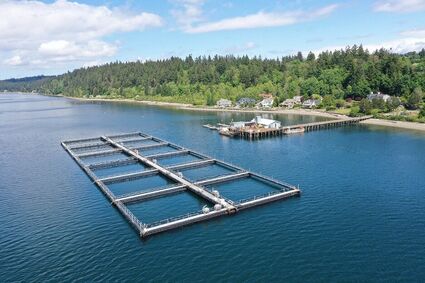 The two leases, one in Rich Passage off Bainbridge Island and one off Hope Island in Skagit Bay, are owned by Cooke Aquaculture.

Net-pen aquaculture continues to be controversial in Washington, where the farming system is considered "high risk" because of the possibility of failure, according to the Canadian conservation organization SeaChoice.

Washington residents have already seen the negative impacts of net-pen aquaculture, following the 2017 Cypress Island Atlantic salmon net-pen failure. When the nets, owned by Cooke, failed, between 243,000 and 263,000 Atlantic salmon escaped, according to estimates from DNR.

The collapse was decried as an environmental disaster in some news accounts at the time, and small numbers of Atlantic salmon were later found upstream in Puget Sound rivers, including the Skagit. None of the salmon have proven to have reproduced or established an ongoing population in Puget Sound, however.

To read more from this article, visit: https://www.cascadiadaily.com/news/2022/nov/15/washington-dnr-cancels-leases-for-last-two-net-pen-salmon-farms-in-puget-sound/