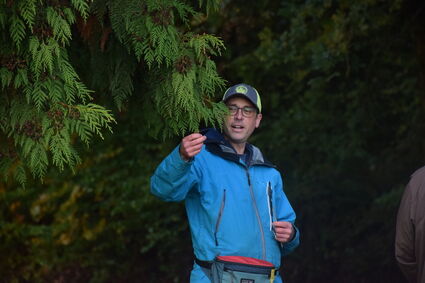 What was once the Cedars at Salmon Creek Golf Course officially reopened on Nov. 2 as the Gordy Jolma Family Natural Area.

The remnants of sand traps were the only clear signs that the land was once used as a golf course as vegetation overtook what were once manicured fairways and greens. The titular cedars and other tall trees flanked the sides of the now meadows, save for patches of trees strategically placed to challenge the golfers of days past.

Now those trees serve to provide enjoyment for Clark County residents as one of several county-owned properties intended to preserve the landscape.

The course was originally built by Gerald James in the 1970s as a nine-hole private course, which later included the addition of the clubhouse and an additional nine at the end of the decade, Clark County Public Works Lands Manager Kevin Tyler said. The course was purchased by a larger company in the 1980s, and changed hands to Jolma and his business partner Greg Anderson in 2005.

To read more from this article, visit: https://www.thereflector.com/stories/old-cedars-golf-course-reopens-as-gordy-jolma-family-natural-area,303280