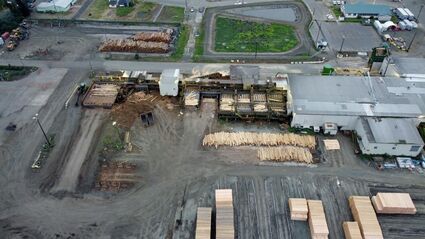 Weyerhaeuser's Raymond Mill will return to life this week after a narrow majority of union workers OK'd a new contract and ended a strike that began Sept. 13.

RAYMOND - Weyerhaeuser workers reported back to work on Monday, Oct. 31, less than a week after 54% of union voters from the International Association of Machinist and Aerospace Workers (IAMAW) approved a new contract. The slim margin left a rift, with 46% of the workers unhappy with the outcome.

Details of the negotiations and final contract have been kept under tight wraps. An inquiry from the Observer to IAMAW Vice President Brandon Bryant resulted in a vague response that the key contentions were, "wages, benefits, and working conditions."

Although workers are returning to the lines at the Weyerhaeuser mill in Raymond, many are calling it "bittersweet" because they are glad to be stepping away from the picket line and back to an hourly wage. But some who have spoken with the Observer are unhappy with the union and how it handled the strike and negotiations.

To read more from this article, visit: https://www.chinookobserver.com/news/local/weyerhaeuser-employees-return-to-work-divided/article_faf3a88c-595c-11ed-a337-c75ce805eddf.html