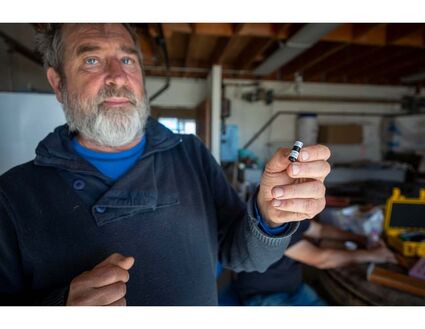 NOAA Fisheries research biologist Dr. Curtis Roegner holds a tiny acoustic tag that will be used to track green crab over the coming months. The project is the first of its kind involving green crab in intertidal areas to better understand the movements and habits of the invasive species to subsequently improve trapping efforts. "We want to find out what they do," Roegner said.

OCEAN PARK - They can crawl, but they can't hide. 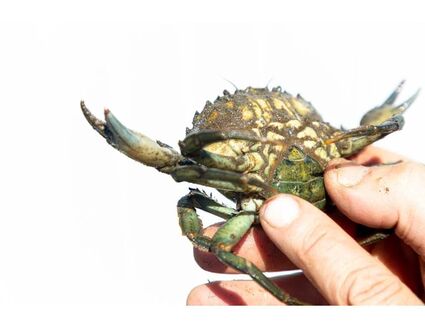 The European green crab (Carcinus maenas) is a small shore crab whose native distribution is in the northeast Atlantic Ocean and Baltic Sea, according to NOAA Fisheries, ranging along coasts from northern Africa to Norway and Iceland. The crab is an effective predator, adept at opening bivalve shells, and has been blamed for harming the soft shell clam industry on the U.S. East Coast and, more recently, the West Coast including areas in Willapa Bay and Grays Harbor.

The war on an invasive crab wreaking havoc on Willapa Bay has entered a new phase, with scientists implementing an innovative intertidal tracking technology to help pinpoint the movements and behavior of European green crab above and below the tide line.

The goal of the project is to help maximize trapping efforts by better understanding where to find the highest concentration of the crab, which have devastated clam populations on the U.S. Eastern Seaboard and elsewhere around the world.

Boots on the mudflats

On a clear October morning, a group of biologists and technicians from the Washington Department of Fish and Wildlife and NOAA Fisheries assembled at a field office south of the Port of Peninsula in Ocean Park.

Throughout the morning, the team worked to collect several crab traps baited days earlier on the tide flats, each collecting dozens of male and female green crabs of various sizes. Nearly every trap contained the palm-sized crabs, ranging from a few to more than a dozen in traps deeper in the tidal zone.

Once collected, the crab were brought back to the field office and sorted by size and sex, before 41 were set aside for their next mission.

To read more from this article, visit: https://www.chinookobserver.com/news/willapa-bay-green-crab-war-enters-new-phase/article_c1dbe004-53cc-11ed-965a-bf9fa9f8082f.html