Local Animal Rescuer Is Home From the War, for Now

A retired truck driver from Lakebay takes a break from volunteering to help abandoned animals and hungry people in Ukraine.

Bates with Kulya ("Bullet"), who was given to K9 Rescue International by soldiers when she needed multiple surgeries after being hit by a car, now on her way to adoption in the UK. Bates said, "That little dog, according to her soldier family, saved their lives a number of times. She could hear missiles coming before they could, so they knew when they were about to get hit. They love their animals, they really do."

"We forgot what we were supposed to do," he said. "We weren't hiding the vehicles, we gathered in a group, and that's what they're looking for." Russian drones will direct fire at anyone who appears to be assisting in Ukraine. "Especially humanitarian aid workers. The Russians want to cause fear and confusion so foreigners will leave and abandon Ukraine." 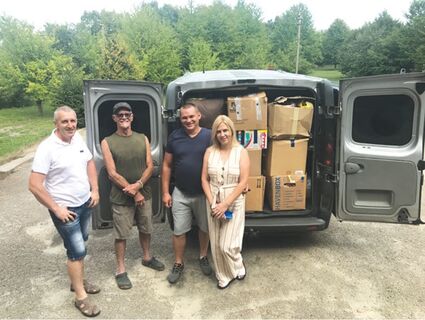 A load of humanitarian aid bound for Kharkiv from the people of Chernylyava Refugee Center.

Bates was in the demilitarized village of Tsyrkuny, east of Kharkiv and 14 miles south of Belarus. The Ukrainians had recently liberated it after Russian soldiers had destroyed and stolen everything they could. "What buildings and homes remain don't have water, gas, or electricity. Yet many villagers chose to stay to take care of their property, their animals, and the animals left behind by the neighbors that fled," he said.

"After the second artillery shell came in, everybody's in their vehicles beating out of the place, it looked like 'Dukes of Hazzard' getting out of there. I'll never forget this one dog wanted to go with us so bad, and we didn't take him." Bates has returned to the village repeatedly, delivering aid and looking for the dog. "We can't find it. We want to bring it out, we've got people who said they'd take it, but I don't know."

To read more from this article, visit: https://keypennews.org/stories/local-animal-rescuer-is-home-from-the-war-for-now,5944