A 'desperate' year for bears in search of sustenance 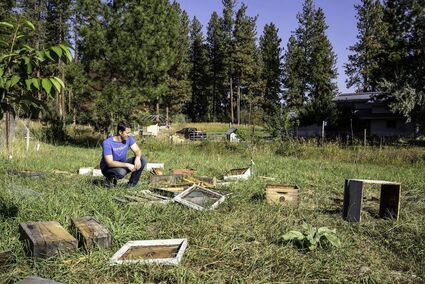 Ryan Fortier surveyed beehives destroyed by bears on his Twin Lakes-area property - despite the installation of electric fences to ward the critters off.

Hungry bears have been unusually persistent and destructive in seeking food near homes in the Methow Valley this year, in some cases repeatedly breaking through electric fences to get at beehives.

Living with bears is always a fact of life for Methow Valley residents, but bears this year seem to be "more desperate to eat" and bolder about foraging near homes, said Jason Day, a law enforcement officer with Washington Department of Fish and Wildlife (WDFW).

"It all started back in May and June and just kept going," Day said. "Bears that have been a nuisance all summer long are ramping it up ... it's much higher than normal."

Bears may be more desperate for food this year due to wildfires last summer that destroyed habitat around the Methow Valley, and an unusually sparse crop of wild berries that are a primary food source for bears.

"Bears that had home ranges that include those fires lost foraging areas," said Scott Fitkin, a WDFW wildlife biologist. "Probably those bears went into hibernation skinnier than usual." And a colder than normal spring and late frost appears to have reduced the supply of berries in hills and mountains around the valley, he said.

Bear activity has been reported around the valley since spring, but residents in the Twin Lakes area near Winthrop report more incidents involving bears, especially during late summer, than they've ever seen.

To read more from this article, visit: https://methowvalleynews.com/2022/09/28/a-desperate-year-for-bears-in-search-of-sustenance/