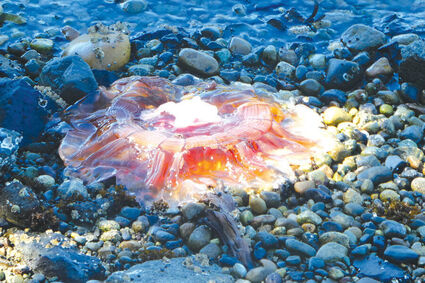 Jellyfish like this one lined the shores of Von Geldern Cove before turning brown like glass in the sun.

A mass stranding of lion's mane jellyfish shocked Key Peninsula beach walkers during the second week of August - and made swimmers think twice about getting in the water.

"I have never seen so many in all my life," said third-generation Home resident Leila Luginbill. She counted over 70 near the Home boat ramp. Most of the stranded jellies were 1.5 to 2 feet in diameter.

The full extent of the stranding is unknown, with reports coming from Von Geldern Cove and Glen Cove. A 1,000-foot stretch of beach south of Glen Cove had 214 jellyfish - over half a ton of gelatinous biomass. Dion and Greg Rurik found one measuring 3 feet across.

"Red jellyfish were abundant on the north, west, and south shores of Von Geldern Cove August 6," said Lakebay resident Ron Cameron. "There were many over 2 feet in diameter and up to 3 feet, and several inches thick." 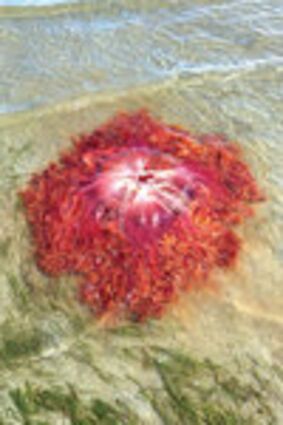 Cameron also said that his wife Carol, who grew up at Hermosa Beach in Tulalip west of Marysville, remembered seeing them thick on the August beaches there during her childhood.

The lion's mane is believed to be the largest jellyfish in the world, with some Arctic specimens growing to 8 feet in diameter and hauling a mass of tentacles over 100 feet long. Its sting, designed to subdue small fish and crustaceans, can be compared to an extended wasp sting - strong enough to give swimmers a miserable time but hardly lethal. It lives in northern oceans around the world, and on the Washington coast ranging as far south as Oregon.

To read more from this article, visit: https://keypennews.org/stories/jellyfish-stranded-in-staggering-numbers,5811