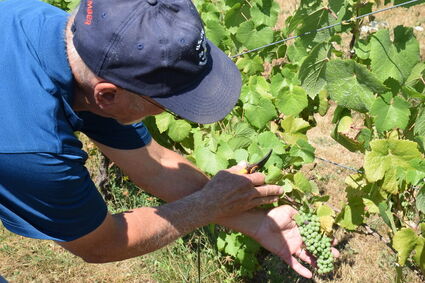 Winemakers across Southwest Washington hope to federally recognize the region for its grape-growing and production.

On Aug. 15, the Southwest Washington Winery Association announced it had submitted a petition to be recognized as an American Viticultural Area (AVA.) The distinction comes through the Alcohol and Tobacco Tax and Trade Bureau, which is part of the Department of the U.S. Treasury. It would allow wineries in the area to mark their labels with a federally-recognized origin.

If the petition is accepted, the region would be known as the Mount St. Helens AVA in homage to the mountain that overlooks the span of the region. Roger Rezabek, co-owner of Rezabek Vineyards and Winery in Battle Ground and chair of the association's AVA task force, said the area's boundary would extend up to the Thurston County border and include parts of Clark, Cowlitz, Lewis and Skamania counties.

Rezabek had been a home winemaker for decades before he moved to the area in 2005. He, and his wife Donna, received a winery license in 2012, and began growing pinot noir grapes before diversifying to the 15 different varieties they currently have.

The Southwest Washington Winery Association formed in 2016 with one of its goals being the AVA recognition, Rezabek said. The distinction would help fill a gap, since to the north there is the Puget Sound AVA, the Willamette Valley AVA is to the south and the Columbia Gorge AVA is to the east.

To read more from this article, visit: https://www.thereflector.com/stories/local-winemakers-seek-federal-recognition,299016