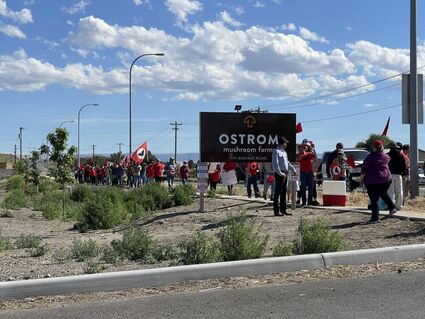 Ferguson's lawsuit, filed at the Yakima County Superior Court, asserts that Ostrom discriminated against its workers on the basis of gender, citizenship and immigration status, in violation of the Washington Law Against Discrimination.

"The evidence my team uncovered is clear," Ferguson said. "Ostrom discriminated against female farmworkers and Washington residents so that it could hire mostly male foreign H-2A workers who have fewer rights. Their conduct is disturbing and unlawful,"

Ostrom workers reported to the Attorney General's Office that around the time Ostrom started applying for the H-2A program in 2021, Ostrom also increased the pickers' hourly production rate and began disciplining pickers who did not meet the new rates with warnings, suspensions, and terminations.

To read more from this article, visit: https://www.sunnysidesun.com/news/attorney-general-files-civil-rights-lawsuit-against-ostrom-mushroom-farms/article_13b53c72-1e80-11ed-91e4-8373d1dddf61.html