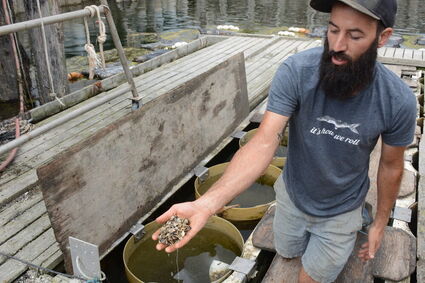 Drayton Harbor Oyster Company (DHO) is seeking to expand its oyster growing operations to add an off-bottom farm in a cleaner area of Drayton Harbor as water quality issues continue to be a pressing challenge. The farm would be in addition to the company's existing tideland farm on the eastern side of the harbor.

DHO co-owner Steve Seymour said he began looking into the benefits of off-bottom farming a few years ago after seeing it used on the east coast, Australia, New Zealand and Europe. Seymour and his son, Mark, own the Drayton Harbor tideland oyster farm and DHO restaurant on Peace Portal Drive.

"On-bottom may be the easiest and cost effective," Seymour said of the company's current oyster farming method. "But I'm looking ahead at deteriorating water quality, more and more pressure to reduce eelgrass impacts and trying to reduce the workload for my crew."

The proposed farm would be situated on nearly nine acres of Drayton Harbor waters managed by the state Department of Natural Resources (DNR), but would only take up .4 acres of over-water coverage, according to the project plan. The site would be 3,000 feet from the shoreline near Drayton Harbor Road and Semiahmoo Parkway. About 6,600 floating mesh baskets would contain 10 dozen Pacific oysters, which have been farmed in the harbor since being introduced in the early 20th century, according to the project application materials.

Oysters clean the harbor through filtering water but this also means they can become unsafe for consumption when water quality degrades. The oyster growing system will be in what Seymour believes is the cleanest water in Drayton Harbor.

To read more from this article, visit: https://www.thenorthernlight.com/stories/drayton-harbor-oyster-company-seeks-oyster-farm-expansion-in-face-of-water-concerns,20933