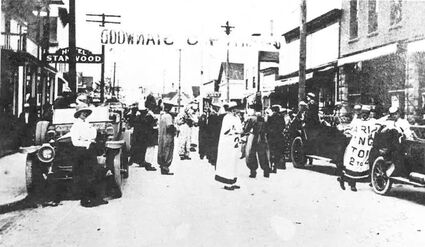 Market Street in Stanwood looked like this during of the town's gala days in 1913.

But just a block or so north of the highway are the main streets of Stanwood's historic commercial core, which for decades was the most-used route through town.

In the first half of the 20th century, shoppers and visitors could stroll the streets finding myriad stores, restaurants, hotels and other businesses.

Like so many communities affected by installation of the federal interstate system, the vitality of the downtown business scene was forever changed when traffic patterns shifted in the 1960s with the construction of Highway 532, connecting the Stanwood and Camano area to Interstate 5.

The area's increasing population, which according to U.S. Census Bureau data has nearly tripled in the last 30 years, has meant more traffic flowing along Highway 532 that has resulted in more commercial development along the route - not so much downtown.

To read more from this article, visit: https://www.goskagit.com/scnews/news/exploring-history-interstate-system-affected-stanwoods-retail-growth-patterns/article_0043dca9-d366-5431-a3b7-8d81e187c787.html