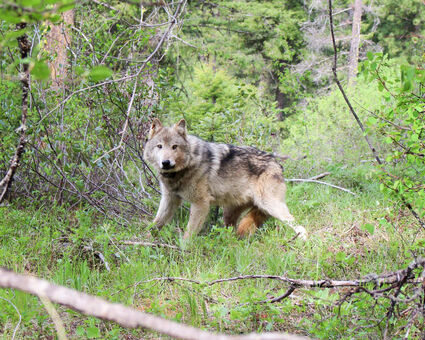 Courtesy of Washington Department of Wildlife

Washington's wildlife commissioners have chosen not to enact a new rule that was developed with the goal of reducing the number of wolves killed under state orders due to conflicts with livestock.

The rule would have designated areas of "chronic conflict" and required state wildlife officials to verify that livestock owners in those areas have taken appropriate measures to prevent conflicts before the state kills wolves after attacks on livestock.

The vote by the Washington Fish and Wildlife Commission at their July 8 meeting was 5-4, with the majority choosing to take no action on the rule that had been sought by Gov. Jay Inslee and wildlife conservation groups.

Under the proposed rule, areas designated as "Chronic Conflict Zones" would have specific plans, developed by Washington Department of Fish and Wildlife (WDFW) in collaboration with livestock producers, for lethal and non-lethal mitigation of wolf-livestock conflict. Before any wolves could be killed, WDFW staff would have to confirm that livestock owners had proactively implemented appropriate measures to deter wolves from attacking their animals.

The process of developing the proposed regulations governing wolf-livestock conflict began almost two years ago after Inslee ordered WDFW to work on an administrative rule to reduce the number of wolves killed on WDFW orders due to attacks on livestock.

However the Fish and Wildlife Commission, which determines policy and provides oversight for WDFW, voted for a "no action" alternative under an environmental impact study developed as part of the rule-making process. The vote means no changes are required in the way WDFW manages wolf-livestock conflicts.

To read more from this article, visit: https://methowvalleynews.com/2022/07/27/fish-and-wildlife-commission-rejects-proposed-wolf-rule/