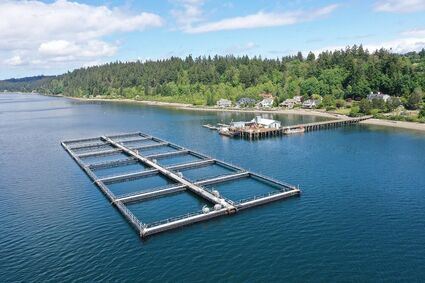 The King County Superior Court jury awarded the Lummi Nation close to $600,000 in damages Wednesday over the 2017 collapse of an Atlantic salmon net pen in Puget Sound.

The collapsed net pen, owned by Cooke Aquaculture Pacific LLC, triggered statewide studies, new regulations and bans on farming non-native fish when it collapsed five years ago, releasing close to a quarter-million Atlantic salmon into the sea near Skagit County.

When the nets failed, between 243,000 and 263,000 Atlantic salmon escaped, according to estimates from the state Department of Natural Resources. Fishermen from the Lummi Nation went to work quickly, trapping more than 43,000 escaped fish. Cooke paid out $30 per recovered fish, about $1.3 million in total.

The collapse was decried as an environmental disaster in some news accounts at the time, and small numbers of Atlantic salmon were later found upstream in Puget Sound rivers, including the Skagit. None of the salmon have proven to have reproduced, or established an ongoing population in Puget Sound, however.