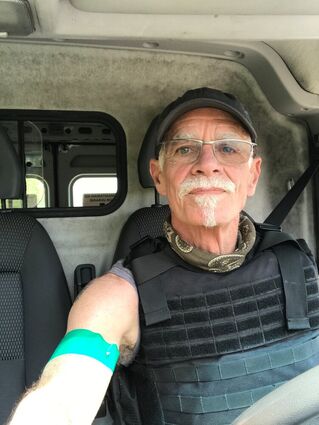 Tom Bates at the wheel. The green tape around his arm identifies him as a friendly to the Ukrainian military.

Approximately 5 million people had fled Ukraine and another 8 million were internally displaced as of May 15 after their country was invaded by the Russian Federation Feb. 24. Many who ran tried to take their pets with them, but at least 1 million animals were abandoned, according to the Humane Society International.

The Ukraine-based animal rights organization UAnimals discovered 485 dogs that had starved to death in locked cages at a deserted animal shelter in Borodyanka in the Bucha region of Kyiv (KEE-ef), the site of multiple atrocities allegedly committed by Russian soldiers.

One dog saved by the Polish ADA Foundation had been shot eight times and was paralyzed. Other animals - dogs, cats, horses - were missing limbs or were wounded by shrapnel. All were traumatized.

A Lakebay man thought he could do something about that.

To read more from this article, visit: https://keypennews.org/stories/local-man-is-saving-animals-in-ukraine,5517