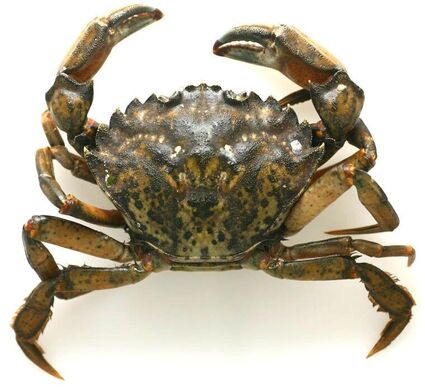 A large European green crab can be green, yellow or orange in color. The best method for distinguishing a green grab is by counting the five "teeth" on either edge of their shell, officials said.

Voracious invaders are seeking a foothold in the region's tidelands. And you've been enlisted in the battle.

The enemy is the European green crab - considered one of the world's worst invasive species for how it feeds on shellfish such as clams, mussels, young oysters, small fish and even young Dungeness crab.

They can destroy marsh habitats by burrowing into the mud, -obliterating eelgrass beds and disrupting critical habitats for juvenile salmon, herring and other animals.

Washington wildlife officials are sounding the alarm after an infestation detected in 2019 at Lummi Island ballooned from 2,600 captured green crabs in 2020 to more than 86,000 in 2021.

"We want to prevent that explosive growth," said Chase Gunnell, a state Department of Fish and Wildlife spokesperson.

To read more from this article, visit: https://www.goskagit.com/scnews/news/a-new-invader-european-green-crabs-pose-a-threat/article_a5b3c3d3-bd0e-5442-be99-cd90c09f3e72.html