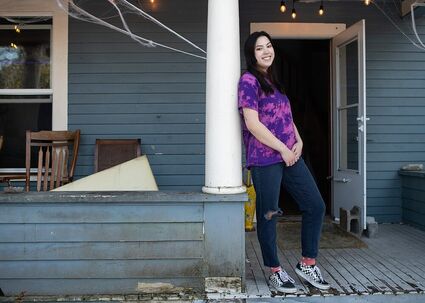 Natalie Vinh stands on the front deck of Bluebird - a popular local venue for house shows in Bellingham. Managed entirely by Vinh, Breakout Magazine is a collaborative online music magazine that aims to cover bands and artists who are just breaking out, often playing house shows at venues like Bluebird.

In September 2021, Natalie Vinh saw a need for a local music publication. About a month later, she launched Breakout Magazine.

Managed entirely by Vinh, Breakout is a collaborative online music magazine that aims to cover bands and artists who are just breaking out (hence, the name) and may not have many press opportunities.

Vinh, 20, studies marketing at Western Washington University, where she has worked on The Front and Klipsun, both university publications. Though she considered majoring in journalism, she wanted to gain experience in other areas.

Music journalism was not always Vinh's focus. She grew up in Davis, California - a city where the high school music scene, she said, was nearly nonexistent. While touring colleges in Washington, Vinh visited KEXP, a non-commercial educational radio station in Seattle. It planted a seed.

After high school, she landed at Western, where she went to her first house show as a freshman.Vin

To read more from this article, visit: https://www.cascadiadaily.com/news/2022/may/19/wwu-students-breakout-magazine-offers-writers-bands-opportunity/