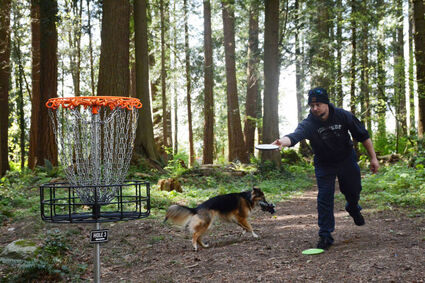 Mike Williams makes a shot on hole three of Lincoln Park's disc golf course April 29. He said he plays about four times a week with his dog, Frankie.

Now that it's May, with hopefully warmer weather around the corner, it's a great time to get out to local parks. Walking in the woods has shown to benefit physical and mental health. To spice things up, Blaine's Lincoln Park offers the added excitement of a challenge: Disc golf.

In the game, disc golf players count strokes each time a disc is thrown. Starting from the tee pad, players take turns until they finish the hole by throwing the disc in the basket. The player with the least throws at the end of the game wins.

The average disc golfer walks nearly three miles per 18-hole round, or 5,613 steps, according to a Western Carolina University study. The study clipped pedometers on 228 men and 112 women who played 15 different disc golf courses. It also found each additional throw resulted in just over three additional steps per hole. So when friends are beating you, just tell them it's doctor's orders.

The sport offers a light, full body workout, which has been proven to improve weight loss and heart health. It also has been shown to have mental health benefits.

To read more from this article, visit: https://www.thenorthernlight.com/stories/disc-golf-offers-low-impact-full-body-workout-in-blaine,19873