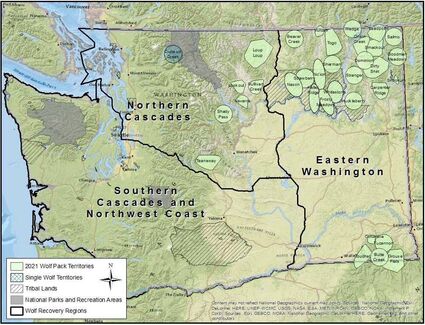 Courtesy of Washington Department of Fish and Wildlife

Statewide, the Washington Department of Fish and Wildlife reported that in 2021, four new gray wolf packs were established in four different counties.

The gray wolf population in Washington topped 200 animals last year, with 33 packs in the central and eastern parts of the state at the end of 2021.

The Washington Department of Fish and Wildlife (WDFW) recently released its yearly wolf population report, which tallied 206 wolves, a 16% increase over the 2020 count of 178 wolves. Of the 33 packs documented in 2021, 19 had successful breeding pairs. In 2020, WDFW counted 29 packs with 16 breeding pairs.

Three packs with breeding pairs (Lookout, Loup Loup and Sullivan Creek packs) occupy territories in and around the Methow Valley, and each increased in size last year. A breeding pair is a measurement of a pack's reproductive success, and is defined as at least one adult male and one adult female wolf that raised at least two pups that survived until Dec. 31.

To read more from this article, visit: https://methowvalleynews.com/2022/04/20/states-gray-wolf-population-increased-in-2021/