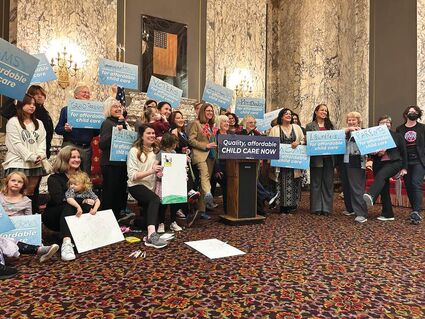 Sen. Patty Murray, D-Washington, joined with supporters in Olympia to celebrate passage of a $1.85 billion increase in federal funding for the Child Care and Development Block Grant. The increase was part of a large appropriations bill adopted in December.

Low-income families struggling to afford childcare will get some help thanks to a big bump in federal spending. U.S. Senator Patty Murray, D-Washington, was in Olympia Jan. 18 to promote passage of a $1.85 billion increase in federal funding for the Child Care and Development Block Grant which will help improve childcare programs across the nation.

"It will help our struggling providers to keep the lights on and it will make a world of difference," Murray said. "But let me be very clear, we are a long way from saying mission accomplished." Murray said families across the state are stressed and staying up late trying to figure out how to find and afford childcare. Parents are forced to leave their jobs and stay out of the workforce because they cannot find childcare, while childcare providers are leaving their jobs because they are struggling to make ends meet, Murray said.  "We have to do better for kids, for moms and dads, for workers, for our economy and for everyone, because this crisis is hurting everyone and it's just going to keep getting worse," Murray said.

The childcare system has been recovering since the COVID-19 pandemic and is making its way back to pre-pandemic levels, said State Senator Claire Wilson, D-Federal Way. Wilson's landmark bill, the Fair Start for Kids Act, was passed in 2021. It provided a $1.1 billion investment to help childcare and early learning become more accessible and affordable for families around the state, she said. Since then, efforts to keep children in childcare safe and healthy have improved. "We've been able to do all of this because of the work of Senator Murray," Wilson said. "She has been instrumental in securing funding at the federal level that has helped us tremendously and allowed us to build libraries and spend our state dollars in flexible ways."

Murray is Chair of the Senate Appropriations Committee in the new Congress, and she says she will continue to advocate for more investment in childcare programs, including those in rural communities who have only one childcare facility available.

Wilson is now working on a bill involving undocumented families who are not allowed working connections in childcare. The bill would allow people in higher education programs to get those working connections so they can complete their education. "We're looking all over and we're thinking about where children are, and we know we need to meet the needs, and it shouldn't matter the number as much as where kids are in the quality of service they deserve," she said.