Seahawks get some support from Olympia 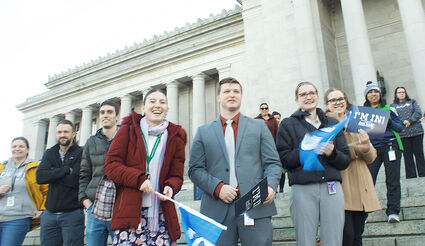 Excited constituents and lawmakers stand outside of the Capitol building in Olympia waiting for Walter Jones to give a speech. People waved their "I'm in" banners and rallied for the Seattle Seahawks. 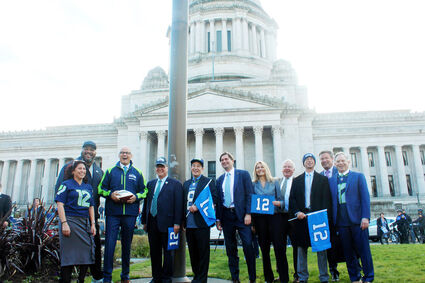 Gov. Jay Inslee, Secretary of State Steve Hobbs and other Washington lawmakers stand in front of the legislative building with Seahawks star Walter Jones after raising the 12th-man flag Jan. 11.

Jones said meeting Washington lawmakers in the Capitol was a great way to kick off the legislative session.  "To get a chance to get them out of that element for just a second to have fun...to be able to do this for the state and get ready for the season is pretty amazing," Jones said.

Known for being an impressive offensive lineman and an inductee to the Pro Football Hall of Fame in 2014, Jones played his entire professional football career with the Seahawks and was a seven-time All-Pro selection. Lawmakers joined Jones and took turns getting the flag to the top. The bright blue 12 th-man flag waves beside the state and US flags.

"I'm looking for them to make some noise in the playoffs. I think it's pretty cool that they got a chance to get in. I'm looking forward to it," Jones said.

Lawmakers and their constituents rushed to get a picture with Jones. "I've learned never to doubt the Hawks, and they will always be there and fight for every yard. So, SanFrancisco, you don't have a chance. Go Hawks," Hobbs said.