Legislature back to in-person sessions

This year's legislature is more diverse than in the past 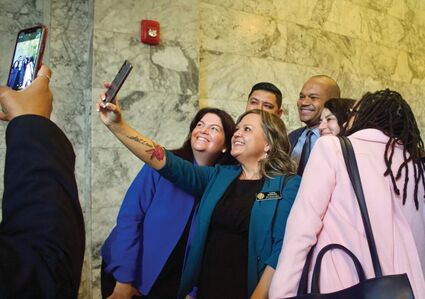 State Rep. Tarra Simmons, D-Bremerton, snaps a selfie with other friends and associates on the opening day of the State Legislature, Jan. 9.

After two years of an online and hybrid Legislature that severely restricted legislators' direct contact during the pandemic, the House and Senate chambers were full of people reuniting and greeting each other at the opening of the state Legislature Jan. 9.

A main issue at the start of the session was moving past the COVID-19 pandemic and adopting new rules and procedures that allows for in-person and remote participation.

President of the Senate Denny Heck, the Lieutenant Governor, said community members sent the Senators to the legislature this session to make a difference.

“They have given us power to do good. And then it is a singular opportunity, an opportunity to make a difference in the lives of people,” Heck said.

Almost half of the House lawmakers in this session are women, an increase from 2022. The state of Washington currently ranks fourth highest in the representation of female lawmakers.

"Washingtonians sent more women and people of color from every corner of the state to work together on solutions to our most pressing issues," Speaker of the House Rep. Laurie Jinkins, D-Tacoma, said in her opening day speech. "Their trust has again been placed in us to get the job done over the next 105 days."

Members of the Squaxin Island Tribe and Nisqually Tribe opened the session with a song as well as a prayer led by Antonette Squally, Vice Chairwoman of the Nisqually tribal council.

Jinkins set the tone for the coming legislative session by encouraging bipartisanship to solve workforce challenges that best serve the interests of working Washingtonians.

"As we kick off the 2023 legislative session, I invite all of us to focus on our common ground. I believe the historical diversity in this chamber strengthens our ability to serve all Washingtonians," Jinkins said.

While white males continue to hold the majority of house seats, year by year, Washington lawmakers are moving closer to representing the demographics of Washingtonian constituents.

In the state, nearly 95% of legislation passed yearly is bipartisan. Members on both sides of the aisle vocalized the desire to continue bipartisan support for the rights of working families across Washington.

Republican Leader Rep. J.T Wilcox, R-Yelm, echoed Jinkins in the need to work together in bipartisanship.

"Let's work on the things we have in common first," Wilcox said. We know we are going to have fights and I don't mean to disrespect anybody's ideology, we all have that. But let's make as much of our effort as possible around accomplishing the best things for people and save our fights for later." 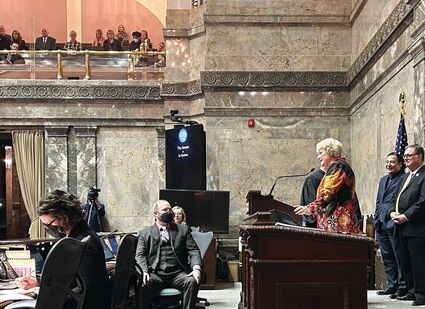 The state Senate was gaveled into order and the first order of business was to establish rules that allow for in-person sessions.

In a sign of what's to come, Wilcox recognizes on behalf of his party that both chambers of the House have many of the same issues concerning affordability, inflation, and how to support the workforce.

The house this session aims to address a wide variety of concerns and provide resources for their constituents this session. For the rest of the first week, various committees continue to meet and tackle these issues together.

"Last biennium, more than a third of bills passed this chamber unanimously. That is a lot of common ground. And that is not easy. These bipartisan successes only happen when we are creative and listen to our constituents and each other," Jinkins said.