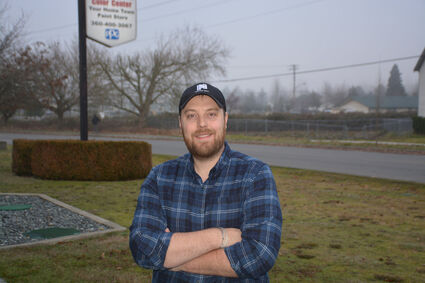 Jared Potter poses for a photo outside of the Nisqually Valley News office in Yelm on Monday, Jan. 2

Jared Potter, a Yelm resident for nearly 20 years, has found success in the film industry.

Whether it's animation or effects work in television shows, movies or commercials, Potter has done it all.

He recently completed his work for the movie and television remake of Beavis and Butt-Head.

"Beavis and Butt-Head Do the Universe" was released to Paramount Plus' streaming service on June 23. Potter said most of his work on the movie included 3D modeling, animation and compositing work.

Prior to his work with the movie, Potter found his big break in the film industry while he worked as a visual effects artist and later as the supervisor for the television series "Z Nation."

The show originally appeared on the SyFy Network. The zombie series, produced in Spokane, lasted for five seasons and 68 episodes.

"I found out about it on a Craigslist ad and I wanted to see if I could work for those guys," Potter said. "And five seasons later, I'd say we had a blast."

To read more from this article, visit: https://yelmonline.com/stories/yelm-resident-jared-potter-finds-success-in-film-industry,306334