Gordy and the sloth - a story for the ages: Giant fossil named for Ilwaco grad who found it 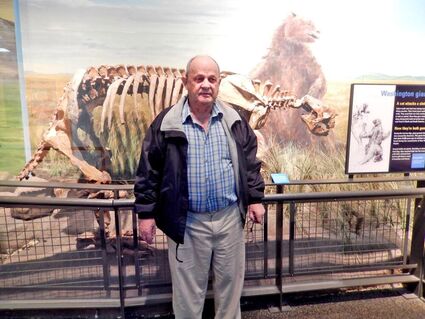 Courtesy of the Simmons family

Gordon "Gordy" Simmons of Skamokawa is pictured at the Burke Museum in Seattle with the fossil of the giant sloth. The 1954 Ilwaco High School graduate moved to the greater Seattle area and was involved in construction of the roads, bridges and other landmarks that created Seattle's distinctive urban skyline. His crew was working on an expansion of the Seattle-Tacoma International Airport when he found the bones of a giant ground sloth.

The Skamokawa resident has had a fossil named for him.

"Gordy" is the name bestowed by the Burke Museum in Seattle on the skeleton of an extinct giant ground sloth.

Simmons discovered the remains of the beast in 1961 while working on expansion of the Seattle-Tacoma International Airport.

And 60 years later, he never tires of telling the story.

He and his crew were trying to cement in a fourth light tower on the new runway when they encountered an obstruction. "We couldn't get the tower in and out popped a bone," he said. "I thought at first it was a cow bone, but it would have had to be a pretty big cow!"

He knew immediately it was unusual. "Better call the university - we've got a dinosaur down here!" he told his crew. "The guys were mad at me because we lost three days' work! We thought it was a bison, then saw the claw."

To read more from this article, visit: https://www.chinookobserver.com/life/gordy-and-the-sloth-a-story-for-the-ages-giant-fossil-named-for-ilwaco-grad/article_d9230ff6-a640-11ec-9866-a76cd95d83c4.html