Pruning to prepare for award-winning wine 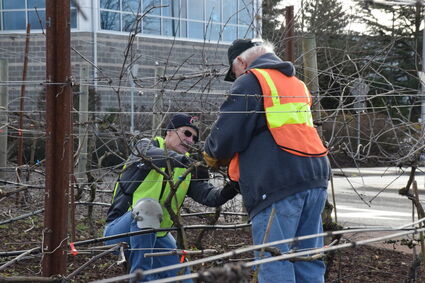 Although its sports teams pay homage to its wildlife and past agricultural tradition through the Raptors and the Spudders, one other notable aspect of Ridgefield is prominently displayed for anyone driving into it off of Interstate 5.

On Feb. 5, a number of volunteers, some of which are or were city officials, came to the roundabout at the intersection of 56th Place and Pioneer Street to prune grapevines located at its center. The winter weather agreed with their work, opening up sun for portions of the operation.

The volunteers were pruning down grape vines so they can grow a healthy set of grapes during the growth season, Ridgefield City Councilor Ron Onslow said. Though Onslow is not an enologist, or one who studies wine, over the last several years he has learned more about wine than he ever thought he would.

The grapes are used to make "Ridgefield Roundabout Red," a wine produced by the city that has already garnered national attention. Onslow was serving as mayor at the time the council initially approved the idea that led to grapes being grown in a few of its roundabouts.

The wine from the roundabouts received a gold medal at the 2020 New York Finger Lakes International Wine Competition, a fact proudly displayed on the bottle which also features a design by local artist Barbara "It's kind of neat that it won gold in New York," Rob Aichele, a city councilor and volunteer said.

To read more from this article, visit: https://www.thereflector.com/stories/pruning-to-prepare-for-award-winning-wine,284191