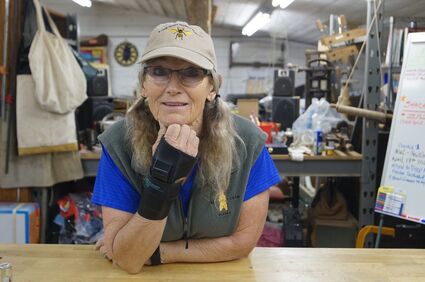 A Birch Bay beekeeper received a statewide award for her dedication to protecting honeybees from the Asian giant hornet.

Washington State Beekeepers Association (WASBA), a nonprofit focused on beekeeping education, named Birch Bay beekeeper Ruthie Danielsen as its 2021 Beekeeper of the Year. In her two-year journey to educate the public on the invasive Asian giant hornets, Danielsen has done everything from purchasing the first hornet nest found in the U.S. to helping the Washington State Department of Agriculture (WSDA) hang plastic bottle traps.

"I'm absolutely humbled," said Danielsen, a hobbyist beekeeper with six hives of her own. "It's wonderful but I'm just humbled because my motive for going after the hornet is it just needs to be done."

Danielsen first became concerned about the Asian giant hornet when she listened to a February 2020 presentation about the hornets at a Mt. Baker Beekeepers Association meeting, a local beekeeper organization in which she's involved. Immediately, Danielsen spurred into action and, with WSDA's help, started organizing trapping supplies among Whatcom County beekeepers and educating members of the public on the importance of eradicating the species from North America.

Danielsen's efforts were captured in Discovery Plus' "Attack of the Murder Hornets" that documented state scientists' and beekeepers' work to track the hornets and eradicate 'nest zero,' the first nest found and destroyed in the U.S.

To read more from this article, visit: https://www.thenorthernlight.com/stories/birch-bay-beekeeper-named-2021-beekeeper-of-the-year,19071