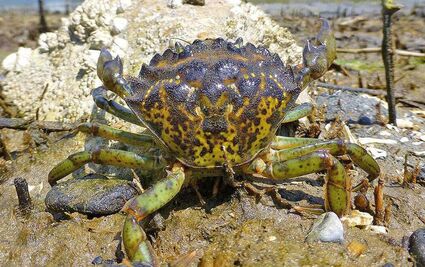 Despite its name, the European green crab's distinguishing feature is not its color, but the five spines to the outside of the eye on the shell.

WILLAPA - Non-native European green crab are in the midst of a major expansion in Washington coastal waters, including Willapa Bay. The small crab is regarded as a potentially devastating invasive species.

The Shoalwater Bay Indian Tribe and Pacific County Vegetation Management (PCVM) have been working to determine overall populations and track their growth in the bay. In 2021, PCVM's Ed Darcher and others trapped 10,600 green crab in Willapa. Washington Sea Grant staff and volunteers are thought to have found around 4,400 last year in Grays Harbor.

The invasive species was first detected here in 1998, but populations remained low for most of the next two decades. State funding for ongoing monitoring was axed in 2003. However, a recent upswing in the crab population in Willapa Bay has local officials and shellfish farmers worried about their long-term impact on local aquaculture.

"I started to hear regular reports from farmers around 2015 and at that point the reports were pretty widespread through Willapa Bay," said David Beugli, executive director of the Willapa Grays Harbor Oyster Growers Association. "Farmers were reporting them on the oyster and clams beds, bare tide flats, within eelgrass beds and in deep channels. That was when we began to encounter multiple age classes and [egg-bearing] females. This is typical for an invasive species that persists in low number for years or decades until conditions become optimal."

Willapa shellfish growers began seeking state help with the issue, but made little headway until green crab numbers recently began exploding in Lummi tribal waters in north Puget Sound. This generated a response from the governor.