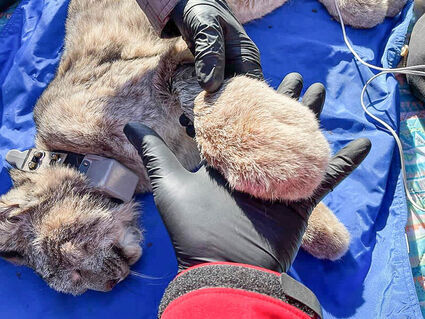 A wildlife worker holds up the paw of a sleeping lynx, showing its size.

Several lynx have been captured in Canada and relocated to the Colville Indian Reservation in in hopes that a resilient population will be established there in an effort that uses the two nations' differing "endangered" stances on the species in a way that could connect populations from the Cascades to the Canadian Rockies.

Project biologists, trappers and veterinarians are working together to ensure that the safest techniques are being used during processing and transportation of these animals.

A lynx in a cage in Canada, where they are not considered endangered and it is legal to trap them.

Richard Whitney, wildlife manager for Colville Tribes' Fish and Wildlife (CTFW) discussed in a news release what it takes to capture and process these native, forest carnivores.

"The lynx are live trapped using box style traps that are baited with an assortment of attractants," says Whitney. "We are working in partnership with existing trappers on established trap lines. In fact, they do the trapping for us and we are able to take the cats out live without them harvesting the lynx for pelts. We pay them a set rate for the cats, so that they don't lose money for each lynx that they don't sell to the fur market. They have been great partners in this project. We currently have two trap lines that are being monitored."

To read more from this article, visit: https://www.grandcoulee.com/story/2021/12/15/news/colville-tribe-working-to-relocate-lynx-from-canada/14839.html