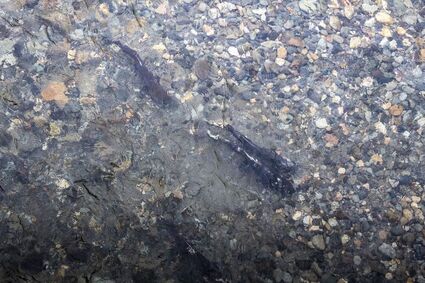 In the complex world of salmon recovery, coho are something of a success story right now.

This fall, a record 25,000 coho salmon passed over Wells Dam, the highest number since records have been kept, said Rick Alford, supervisory biologist for the Yakama Nation Mid-Columbia Coho Reintroduction Program. The previous record was set in 2019, when only about 12,000 came back over Wells.

Coho spawn from mid-October to early December. This year, the easiest place to see coho spawning is in the shallower pools in the Methow River below the Spring Creek Bridge in Winthrop.

Coho were once the most abundant anadromous species in the Methow basin. (Anadromous fish spend part of their life in freshwater and part in the ocean.) Locally adapted, or native, stocks were extirpated in the early 20th century due to overfishing, habitat loss, past hatchery practices, and the construction of dams. They were completely gone from the Mid- and Upper Columbia and from tributaries in the Methow Valley, Alford said.

There were no native coho in 1996 when the Yakama project started, with a goal of re-establishing the lost, naturally spawning populations. Because there are no longer native fish here, coho are not considered "endangered" like spring Chinook and steelhead are.

"It's exciting stuff to see fish coming back in these numbers," Alford said. All the returning coho are from parents that returned to spawn in the Methow, Chewuch and Twisp rivers, Alford said.

To read more from this article, visit: https://methowvalleynews.com/2021/12/08/coho-have-banner-year/