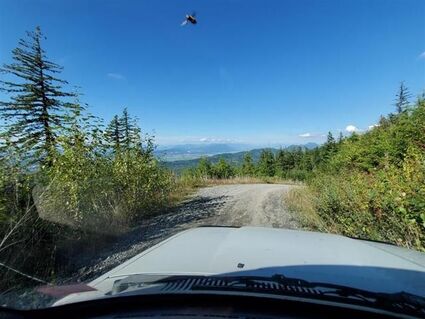 A fourth Asian Giant Hornet nest eradication is planned for Thursday, Sept 23. The nest is located in north Whatcom County.

The Washington State Department of Agriculture has eradicated three Asian Giant Hornet nests since late 2020 and has its eyes on a fourth nest later this week.

All located in north Whatcom County near Blaine, these nests are dangerous because the hornets that live in them are invasive and known to kill adult honeybees and take their larvae and pupae back to their own nests to feed their broods.

The fourth nest was discovered a couple of weeks ago, but its location makes it difficult to eradicate. It's about 20 feet off the ground, said Karla Salp, public engagement specialist with the Washington State Department of Agriculture. Special equipment will be required to eradicate the nest.

Salp said all four nests were initially located using tracking technology. According to the United States Department of Agriculture, these radio tags, most recently used to track the invasive spotted lanternfly on the East Coast, are attached to captured hornets, which are then followed to their nests. A typical eradication consists of USDA entomologists plugging a nest with foam, wrapping the tree in plastic and vacuuming out the hornets. The team also injects carbon dioxide into the nests to catch any stragglers.

To read more from this article, visit: https://www.lyndentribune.com/news/another-asian-giant-hornet-trap/article_4c508ab4-1ba7-11ec-9867-dfd8adfb6a5d.html