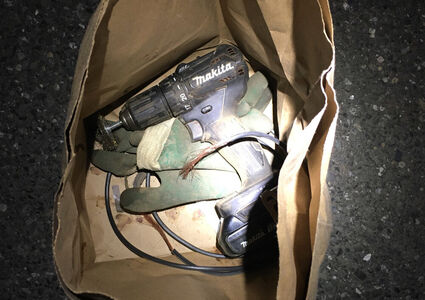 COURTESY U.S. DISTRICT COURT FOR THE WESTERN DISTRICT OF WASHINGTON

Black wire, gloves, a cordless drill, scissors and tape were found in a grocery bag near the north Bellingham train tracks November 28, 2020.

A Seattle jury convicted a 28-year-old Bellingham woman charged with one count of violence against a railroad carrier for attempting to derail a train in north Bellingham almost a year ago.

Reiche faces up to 20 years in prison for violence against a railroad carrier and is expected to be sentenced by Chief U.S. District Judge Ricardo S. Martinez on December 17.

On November 28, 2020, Whatcom County Sheriff's Office deputies arrested Reiche and Samantha Frances Brooks, a 24-year-old Bellingham woman, after they were seen on surveillance video kneeling on BNSF tracks by Cliffside Drive just before midnight. Deputies discovered a shunt on the tracks, which prosecutors said could disable a railroad-crossing guard so vehicles wouldn't be alerted of an approaching train. Shunts, made of wire and magnets, can trigger a train's automatic brakes and cause it to derail.

Federal prosecutors alleged Reiche had a brown paper bag with wire similar to that used in the shunt, a drill with a brush head, a magnetic adhesive and gloves. Reiche's attorneys tried to suppress evidence found in the bag because they argued the bag was searched without a warrant and tried to have statements Reiche allegedly made before she was warned of her Miranda rights thrown out.

A crude-oil train was scheduled through north Bellingham after officers arrested the women, according to the DOJ.

Before her trial, co-defendant Brooks pleaded guilty July 9 to one count of interfering with BNSF tracks and will be sentenced October 8. Brooks could serve up to 20 years in prison, but the government recommended a low end of the applicable sentencing range because of her plea agreement.

To read more from this article, visit: https://www.thenorthernlight.com/stories/seattle-jury-convicts-bellingham-woman-of-attempted-train-shunt-attack,17669