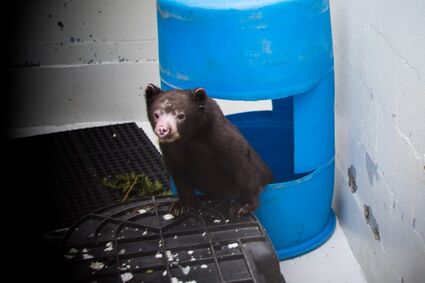 A young female black bear cub is recovering from her injuries in the Cedar Creek Fire at PAWS in Lynnwood.

A young bear cub seriously injured by the Cedar Creek Fire west of Mazama earlier this summer is recovering well at the Lynnwood-based PAWS animal rehabilitation center, officials from the organization announced Aug. 31.

PAWS held a press conference on the bear and two other cubs burned in the Twenty-Five Mile Fire near Chelan, along with Washington Commissioner of Public Lands Hilary Franz.

The Cedar Creek bear is a female black bear cub roughly 7 months old and about 13 pounds when rescued. She was found alone by firefighters, who watched her until a bear and cougar specialist with the state Department of Fish and Wildlife (WDFW) arrived.

"She's an absolute trooper," said Dr. Nicki Rosenhagen, PAWS wildlife veterinarian, at the press conference. "Her resilience is inspiring, and in spite of all of the trauma and stress she has endured, she's acting as much like a normal bear cub as she can - eating, sleeping and even starting to play."

Rich Beausoleil, WDFW bear and cougar specialist, said he suspects the small cub was unable to keep up with her mother or fled up a tree and got caught in the fire.

To read more from this article, visit: https://methowvalleynews.com/2021/09/08/bear-cub-burned-in-cedar-creek-fire-recovering/