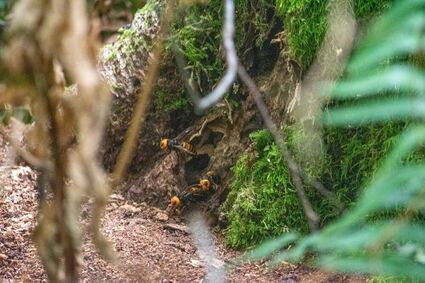 Scientists found an Asian giant hornet nest in east Blaine August 19, a quarter of a mile from where the first hornet of 2021 was spotted nearly a week earlier near H Street Road. The nest is the first to be found in the U.S. in 2021.

The nest will likely be eradicated this week after the Washington State Department of Agriculture (WSDA) fine-tunes its eradication plan, according to WSDA.

"We believe it's too early in the season for reproductive [hornets] to emerge so there's no risk or very, very little risk of new queens emerging from the nest at this point," WSDA public engagement specialist Karla Salp said in a video statement.

The agency is taking time to gather more information, such as using a thermal camera to find out if the hornets are traveling into the ground or up the tree, which will determine how they eradicate the nest. Scientists will eradicate the nest similar to last year, with the hornets vacuumed and then the nest sealed and removed, Salp said.

Scientists found the nest after attempting to track three hornets with a radio tag between August 11 and August 17. Only one hornet led scientists to the nest.

To read more from this article, visit: https://www.thenorthernlight.com/stories/wsda-fine-tunes-eradication-plan-asian-giant-hornet-nest-found-in-east-blaine,17405