Tuna too few: Commercial season off to standard slow start 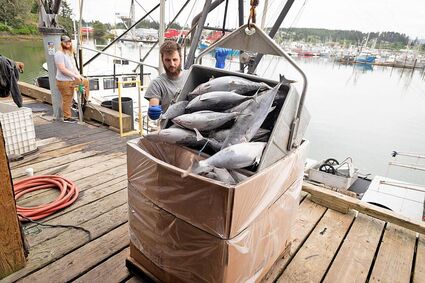 Safe Coast Seafoods and Ilwaco Landing each recorded their first offload of the 2021 commercial tuna season Monday, July 12 in Ilwaco.

Landings have been slow to start the season, fishermen and processors reported, which is par for the course. August has historically been the month with the heaviest commercial tuna landings for Oregon and Washington, with the season wrapping up around October, depending on weather.

"It's a pretty typical start with fish scattered and in low numbers, but we are encouraged that the water temperature and sea life look more typical and are in good shape to hold large numbers (of tuna) as they come in," said Tre-Fin Day-Boat Seafood co-founder Michael Domeyer, who recorded their first tuna of the season Saturday, July 17.

To read more from this article, visit: https://www.chinookobserver.com/news/tuna-too-few-commercial-season-off-to-standard-slow-start/article_8631b31e-e977-11eb-88ac-731fe2e6de75.html