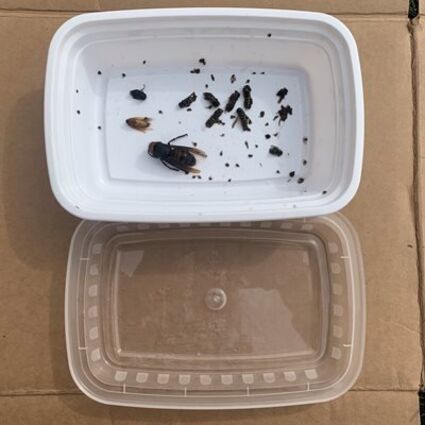 Courtesy of Wash. Dept. of Agriculture

An Asian giant hornet along with other insects that can be found in a homemade trap. The public can start setting traps July 1.

WSDA will be keeping a close eye on Whatcom, Skagit, San Juan, Snohomish, King, Jefferson and Clallam county traps, but encourage all Washington residents to participate. Trapping is 22 weeks and goes until November.

Participants need to log traps on WSDA's online map and check traps weekly, according to WSDA. People can use orange juice and rice cooking wine to make the same traps the public used last year, or a dark brown sugar trap that is new this year.

Although WSDA has been setting traps throughout spring, the agency is now asking the public to participate because July is when worker hornets are expected to appear. Queens grow their colonies in the summer and into the fall, with more hornets leaving the nest later in the season.

To read more from this article, visit: https://www.thenorthernlight.com/stories/public-can-trap-for-asian-giant-hornets-starting-july-1,16943