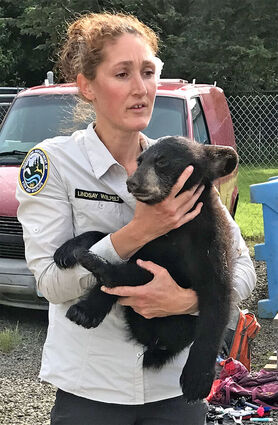 One of the three bear cubs who were rescued in Ilwaco Wednesday morning, June 16, along with their mother, is carried to an awaiting transport vehicle by wildlife biologist Lindsay Welfelt, a Wenatchee-based bear expert with the Washington Department of Fish and Wildlife.

ILWACO - Three little Ilwaco black bear cubs and their mother are adjusting to "wild" life on the Olympic Peninsula on June 16 after the mom's plight generated intense concern on social media.

Although Ilwaco includes some prime bear habitat, these bears resided in the center of the town's residential area, living on unsecured garbage, pet food and other unnatural nutritional sources. Having a protective female with cubs in day-to-day proximity to people would always be a concern, and this case had an added complication: the mom's neck was tightly trapped inside a hard plastic object. These factors prompted an intervention by the Washington Department of Fish and Wildlife. To read more from this article, visit: https://www.chinookobserver.com/news/local/ilwaco-bears-relocated-to-olympics/article_86871ad6-d2c3-11eb-a787-47cd742d916f.html