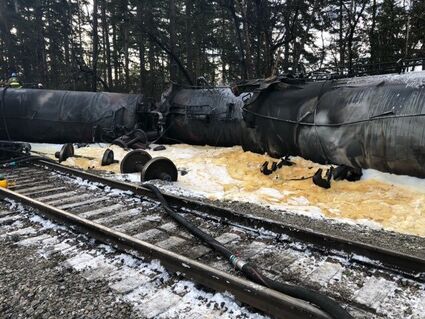 Courtesy of Dept. of Ecology

A report issued on June 10 by the National Transportation Safety Board (NTSB) examines how the tank cars were operated during last December's train derailment. The report does not determine probable cause of the derailment, and the FBI and Federal Railroad Administration (FRA) are left to conclude their investigations.

A 106-car train en route to Ferndale derailed around 11:40 a.m. December 22, 2020, forcing evacuations within a half-mile radius of the 7500 block of Portal Way. Ten tank cars carrying highly flammable crude oil derailed, with three of the cars releasing 29,000 gallons of petroleum, according to the NTSB report. However, the Washington State Department of Ecology reported in January that most of the oil was recovered, except for 5,400 to 8,000 gallons.

To read more from this article, visit: https://www.thenorthernlight.com/stories/ntsb-releases-report-on-custer-train-derailment,16779