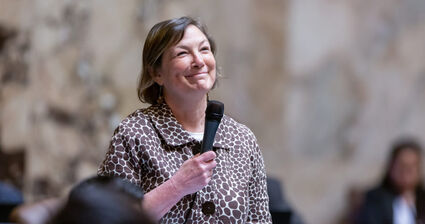 A capital gains excise tax moved one step closer to approval Feb. 17 despite opposition from Republican lawmakers who call the law an unnecessary income tax and warn it will result in a court challenge.

The Senate Ways & Means Committee voted 13-12 to tax 7% of long-term capital gains income for individuals, which would include revenue made from the sale of stocks, bonds, boats, real estate and investments. The tax would not apply to the first $250,000 made by both single and joint filers.

Republican lawmakers submitted 22 amendments to the capital gains tax, none of which were approved. In a statement, Senate Republican Leader John Braun, R-Centralia, said the tax contradicts the will of voters and ignores other solutions to the state's economic recovery.

"SB 5096 is a money grab masquerading as tax reform," Braun said. "The people of our state don't need that, especially at a time like this."

The bill would go into effect in January 2022, meaning those who would pay the tax would do so starting in 2023. This would likely result in around $550 million per year deposited directly in the state's general fund, according to a press release from Sen. June Robinson, D-Everett.

The capital gains tax would not apply to:

• residential dwellings of any value along with the land upon which the dwelling is located;

• assets transferred as part of a condemnation proceeding;

• livestock related to farming or ranching;

• certain types of property used in a trade or business such as machinery and equipment that have been immediately expensed;

• businesses that made less than $6 million in the year;

• and stocks and bonds revenue as well as business and property sales totaling less than $250,000.

Taxpayers could get some credits, with one available against the Business & Occupation tax, as well as a tax credit for some out-of-state capital gains revenue.

Robinson originally put forth the bill as a 9% tax on a single filer making over $25,000 in capital gains revenue and joint filers who made more than $50,000. In the release, Robinson said she amended the original bill to address some issues brought forward during the bill's first public hearing Jan. 14 by Washington residents.

Robinson defended the bill in the statement and said it would apply only to the wealthiest Washingtonians.

"It's a reasonable way of asking those wealthy few to join the rest of us in building a stronger, healthier state for all Washingtonians – a state in which they have thrived," Robinson said in the release.

Sen. Lynda Wilson, R-Vancouver, told the committee the tax is considered an income tax by both the IRS and other state agencies, and would almost certainly be challenged in court if passed.

"My concern here is the cost of the state to the taxpayers," Wilson said. "And we clearly don't need the taxes because we have no deficit."