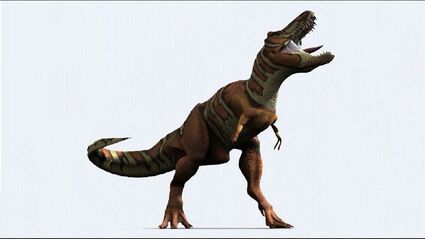 The proposed state dinosaur is Suciasauras Rex, named for a fossil fragment found in 2012 on Sucia Island in San Juan Islands. The fossil is a 17-inch piece of the dinosaur's upper leg and dates to about 80 million years ago. It is the only dinosaur fossil ever found in Washington State.

HB 1067, the bill to recognize Suciasaurus, was introduced this year by Melanie Morgan, D-Tacoma, on behalf of a class at Elmhurst Elementary in the Franklin Pierce School District, who learned about the fossil and took steps to have it recognized by the state Legislature. The bill was introduced last session, passed the House by a wide margin but did not get a hearing in the state Senate. Morgan reintroduced the bill this session.

"This bill is more than just about a dinosaur," Morgan said at a hearing Jan. 27. "It's our formal recognition and appreciation for the hard work, preparation, creativity, and the drive of these students who are now in the sixth grade."

Suciasaurus was a two-legged carnivore about half the size of its relative Tyrannosaurus Rex and lived about 12 million years before its famous cousin. It originally stalked its prey between Baja Mexico and Northern California. The fossil came to rest in the San Juan Islands after land masses drifted north over eons.

Twelve states and Washington D.C. also have official state dinosaurs. Washington already has a state fossil. It is the Columbian mammoth.