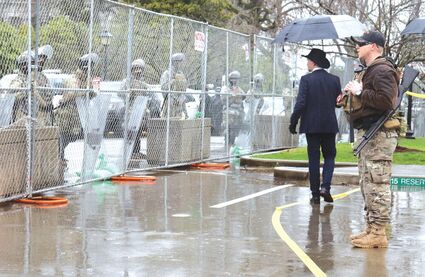 "Our job for every minute of the next 105 days is not just to keep hope alive for the people of our great state, but to make hope a reality," said Rep. Laurie Jinkins, D-Tacoma, after being sworn in for another term as House speaker. "So, let's start working right now."

J.T Wilcox, R-Yelm, took up Jinkins's theme after being nominated for another term as Minority Leader. He stressed the need to focus on the state populations and businesses most affected by the pandemic. Related health and economic impacts are falling unevenly among state residents, same as they are elsewhere, he said.

"Madam Speaker. Many in my caucus are as concerned as you are about the recent events in our country," Wilcox said. "The violence, the breakdown in civil order. I think everyone expects us, even though things are ten times harder in a time of COVID, to be better."

"One thing that we've got to remember, in the middle of all of this," Wilcox added: "It's not about us. It's about every single person in the state of Washington that's bearing a burden that is much harder than it used to be."

Practicing social distancing, some of the lawmakers spoke at the front of the chamber behind plexiglass screens and all of them waited in designated off-floor seating areas to be called in shifts to the floor.

But even as the fleeting session proceeded, Democrats and Republicans voiced diverging views on how best to proceed in tackling the challenges they had outlined together.

Republicans opposed the new resolutions allowing for the session to be held virtually, citing the lack of transparency and inequity a virtual session might fuel.

Historically, public debate on the House and Senate floors forms a large part of any legislative session, drawing spectators to the galleries and lobbyists to the hallways outside the chambers. But this year's session, shaped by COVID-19 public health protocols, will include very few in-person interactions -- not among the lawmakers, who are already heading back to their districts, and not among the lawmakers and members of the public.

"I wish we were not in the middle of a global pandemic, but we are," said Sen. Marko Liias, D-Lynnwood. "We have to follow the best guidance we have from the experts that we have on this date. That is the reason we've crafted the rules the way that we have. So, while I look forward to the day that we can gather again in person, I look forward to the day that my constituents can be down here with us in person. That day is not today."

In the end, lawmakers passed the resolutions to launch this year's remote session with no amendments.

A small group formed in the opening hours of the session outside the Capitol to protest the shuttering of the Capitol building and lack of in-person access to the deliberations going on inside. They gathered beyond a perimeter fence as National Guard and State Patrol stood watch.

Authorities arrested two individuals, and State Patrol reported that one of the men breached the gate of the governor's mansion last week on Wednesday and will be charged with criminal trespassing.