King tides coming: how you can capture them 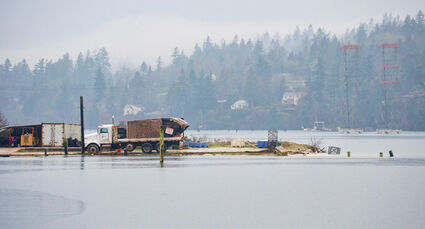 An oyster farm on Burley Lagoon in 2018 during a king tide.

The University of Washington Sea Grant Program has again issued a call for the public to take photographs of the year's highest tides on Puget Sound and the outer coast. The images sent in by citizen scientists will be added to an ongoing effort to document the effects of high water on local waterfronts.

Sea level has risen slightly but steadily in the last several decades. The rise will accelerate over the next 20 years, according to climate models, though predictions for total rise locally range from a few inches to nearly a foot - and ongoing rise beyond that. King tides offer a window into the future, giving scientists and citizens alike a look at how tidal flooding might affect both natural beaches and manmade structures.

"King tide" is an informal term originating in Australia and the Pacific islands that has spread to North America. The highest tides of the year - the kings - occur in winter for astronomical reasons. The Earth's perihelion is Jan. 2, when its orbit takes it closest to the sun, creating the largest solar influence on the tides. The moon, which exerts a more powerful sway over the tides, reaches its monthly perigee - its closest point to Earth - Jan. 9.

The new moon arrives Jan. 13, putting the three celestial bodies in a straight sun-moon-Earth line, effectively combining the sun and moon's gravitational pull on the tides - a situation known as a spring tide, which describes the "springing forth" of water at those times. All of these factors will combine to provide a window into the future.

To read more from this article, visit: https://keypennews.org/stories/king-tides-coming-how-you-can-capture-them,4150